Economic constraints and pursuits; increased tourism and the subsequent transformation of local environment,
nature and culture have contributed to the degradation of the natural landscape of Naran and Kaghan Valley in Northern Pakistan. Prevalent issues are deforestation, sanitation, and a growing culture of irresponsible tourism, which is destroying the living landscape of these valleys. Laajverd Visiting School will investigate how local culture and environment is embedded within the landscape and how can this co-existence flourish rather than fail. It will further investigate the potential of natural and cultural landscapes to contribute to a sustainable economic model for locals i.e. through the presence of precious stones, local craft skills and local practices and patterns. Natural and cultural heritage sites will be explored as the LVS participants work alongside the local population with the aim of generating knowledge and proposing alternate and effective possibilities of understanding landscape as a resort for rehabilitation.

The first day at LVS began with an introduction to the organization Laajverd and the project Laajverd Visiting School, followed by the Creative Participatory Action Research Workshop that was led by Zahra Hussain. Creative Participatory Action Research Workshop was conducted for 4 hours, which introduced the participants of LVS to the importance of participatory research, and how that can lead to sustainable action. Through discussion, power-point presentation and group assignments, the participants mapped out possible participatory action methods and approach that they will adopt in the field. Later on ideas developed in groups were presented to all the participants, which generated a healthy criticism and feedback. This element was further explored after every field research activity in order to help participants carve out a participatory action project. The creative element was explored through the artistic research and dissemination methods, which were discussed during the workshop. This workshop was supported by the small grant from PR Hub at Durham University, UK. A successful element of the workshop is how it has seeped into all the other workshops of LVS regarding culture, community, natural environment and community heritage. Field research for the workshops were designed keeping in view the participatory action component. The group discussions and de-briefing at the end of the day also entailed thorough discussions and critique on the participatory methods used and way forward. 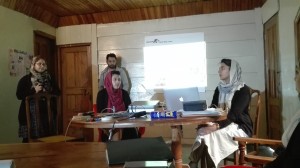 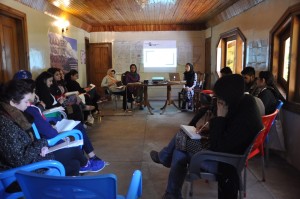 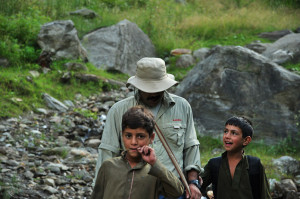 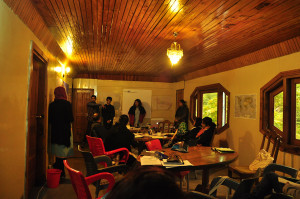 At noon, Aftab Rana presented details on the people, culture and history of the valley and how it has developed over the last few decades. He also focused on the aspects contributing to the degradation of natural environment and landscapes and STFP efforts on promoting sustainable tourism in the Valley. In the afternoon, LVS group was taken to Kamal-bun forest to see apex two thousand year old Deodar tree. On return, the group enjoyed hot tea as the session on Eco-Tourism began. Aftab Rana conducted this session and he laid emphasis on Eco-tourism strategies and how important it is for Pakistan to adopt these. The participants then discussed possible eco-tourism strategies, which could be further developed and discussed during the Visiting School. 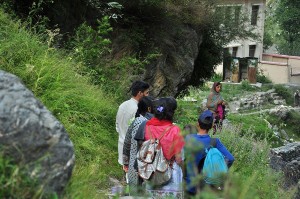 Audio Visual Cultures workshop was conducted on the second day on LVS, which was led by Zahra Hussain and Fatima Hussain. This workshop introduced the participants to indigenous culture, knowledge and traditions, in order to understand the relationship between people and their environment. This fueled a discussion on ‘worldviews’ and how an honest inquiry in the field can aid the researcher in understanding or relating to the worldview of others. The participants were divided into groups to map out local practices and patterns that constitute life in Kaghan Valley. The research was carried out in Kandal, Ranjri, Khannian, Damdama and Batta Kundi. These practices and patterns will be collated under the Indigenous Practices and Patterns Catalog (online journal). The group carried out field research in the afternoon, in the evening they reconvened in groups to present the practices and patterns collected in the field. The crit session took place between 8pm – 9:30pm after which the group had dinner. 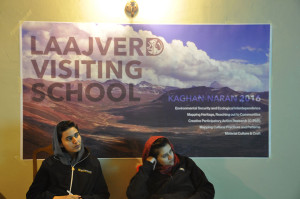 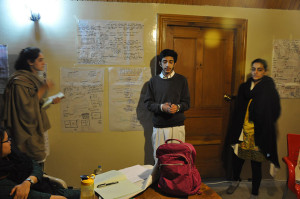 The third day began with Material Culture and Craft workshop, which was led by Maria Naqvi, which sparked a debate on arts, design and craft and the rights of craftsperson and what it means to empower the craftsperson and the craft. Zahra Hussain further supported the discussion as she introduced Participatory Design workshop initiative that can empower the craftsperson and ensure sustainable development of the craft rather than taking a top-down approach. This workshop entailed fieldwork; map the crafts of Kaghan valley in order to see the dying and flourishing craft, skill level of craftsperson and possible development of the craft. After fieldwork, LVS participants presented their findings from the field. The next day was spent in Jared village. One group engaged with woodcrafts persons at the Wood workshop and the other group went to explore loom craftsperson in Jared market. At the woodworkshop LVS participants were given an assignment to develop a product with the craftsperson, Anum Khattak (lvs participant) designed some jewelry items and shared these ideas with Master Sajid who further developed and produced these items in walnut wood. On the same day, Hajra Atiq (lvs participant) got in touch with the Forest Department official and arranged a briefing for the LVS participants. At noon, the participants arrived in Khannian and set off for Participatory Design workshops with Khannian village which involved paper-making and embroidery designs workshop. In the evening, Sarah De Nardi conducted Community Heritage workshop, which led to a bubbling discussion on the relationship of nature and culture. This workshop required participants to develop experiential maps of Kaghan Valley in close consultation with the community in order to explore their idea of home, comfort and their landscape. 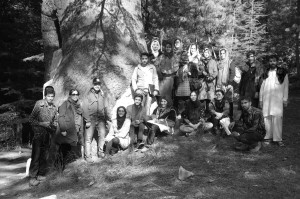 The next day (6th day), LVS group left Khannian for BataKundi to further mapping community heritage. Participants visited nearby villages and met with local people to collect stories. In the evening, ‘environmental security’ workshop was conducted by Suniya Taimour, which entailed the participants to work on sewage disposal, tourism, development and deforestation. Next day, the group set off for Lake SaifulMalook to attend ‘Nature walk’ with WWF persons (Waseem and Muddassir) and wildlife official, which was helpful in understanding the natural landscape and wild-life around Lake Saif-ul-maluk. Participants further understood the challenges to Eco-Tourism and discussed potential sustainable tourism strategies. On Day 8 and 9, participants worked in the field; baked cakes with community women, drawing exercises with school children, visited gravesites with elders, visited pasture-lands in order to develop their projects which were eventually presented to the entire LVS group and some local people, who gave their comments and feedback on each project. After this, possible outreach plans were presented by the LVS core-team in the sectors of education, heritage conservation, craft up-lifting and responsible tourism.