-hydr M.I./ Architect
Resettling the Indus
When we presented our proposals to the villagers of Attabad, the first reply that came back to us was: “I hope your team or you do not mind my response, but WHERE WERE YOUR FOUR YEARS AGO, OR SINCE THEN!?!?!?”

In fact it took us four years to get to the people who have been struggling since 2010 from the landslide and formation of the natural lake around Attabad, Baltistan.It is entirely the fault of ours as the civil-society to be so late in our response to the unsettled-people here; nonetheless, we have gotten the chance to live and work with the people in Hunza and those living in camps from Attabad and other affected villages in the disaster of 2010. We were invited to the area by Laajvard Visiting School and were able to work with an energetic and experienced group of professionals to investigate and search for “THE RIGHT PROBLEMS”

the series of photographs and drawings should guide you through our trip and focus in resettling for Hunza-Gilgit region. The four stages in which this album is divided into are pertaining to how the people’s lives have shifted. 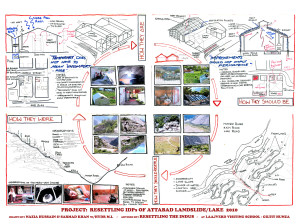 The Combined presentation slide that starts this album will show all four stages in one slide. This transition of living-standards and proposal of resettling the displaced people was presented to the officials of AKCSP (Aga Khan Cultural Services Pakistan) and other members of the local council.We have become more cautious and sensitive on how our work will be sustained financially, considering that new regions are being surveyed and initiated for resettling while regions where work began several years ago HAVE NOT STOPPED, MASHALLAH, but only advanced and expanded (by the support of our generous donors). In hopes to also assist with the donations, we are maturing and advancing our enterprises in every part of Pakistan we are fortunate to Resettle. Apart from the BEEBE Honey techniques shared with the local honey harvesters of Chalt Valley, we were also able to work with the local merchants and masons of Nagir Valley for Precious and Natural Gem Stones. An Enterprise that was registered a year ago by me, is taking on a wonderful addition by the name of: “Raaz-I-Heer”

“May we be able to question how society differentiates between a pebble, stone and diamond! why one is jewel and other rubble?” this enterprise will be exhibited in Lahore first, then to other cities, carrying the message of Resettling the Indus through shimmering and glistening parts of the mountains “STONES”.

Since we have returned, we have been very aggressive in our honey sales and hope that the launch of “Raaz-I-Heer” will also allow us to weave-a-consistent-relation between the mountains, the stones, the IDPs, the buyers/donors of the jewels… all in order to bring more security and peace into the lives of those displaces since 2010.

We have too many responsibilities in the five regions that Resettling the Indus is managing work in, and hope that any new region we travel to, we are able to find some ways of sustaining the work we plan for it, WITHOUT DISTURBING THE WORK ALREADY IN PLACE OR PLANNED.

IN CLOSING, A QUICK OVERVIEW: Those Businessmen and Women who owned and managed their houses, farms, fruit trees and lands once, have had their lives shift in the matter of a few seconds when the Landslide destroyed the villages around Attabad, to cause a natural lake formation that started drowning the villages upstream, as the water started collecting into the lake. Over 400 households were displaced and those same businessmen and respectful participants of the local economy, culture and society have become not just homeless but also “LANDLESS!” their lands do not exist on the face of the earth anymore! today, just as the past four years, they have been living in camps placed in the backyards and farms of other villagers. In difficulty of not just physical state but mainly the mental torture of “BORROWING LIFE, NOT KNOWING HOW LONG IT WILL REMAINED BORROWED!” is unsettling.

Although the improvement of camps is not a permanent solution but how temporary is FOUR YEARS? and how long will this “temporary state of living” remain for them? without the involvement and interest of the GB and Federal Government, these families cannot locate anywhere. Until then, WINTERS WILL COME, so will the next summers! both bringing harsh climate conditions for a family to live in shelters made of STEEL CORRUGATED SHEETS.

SO UNTIL WE CAN ASSIST IN PERMANENTLY RESETTLING THE FAMILIES, WE WILL MAKE SURE THEIR TEMPORARY STATE OF LIVING IS IMPROVED TO COPE WITH THE WINTER COLD AND SUMMER HEAT!

Let this become so impacting that the government is forced to pay attention to this urgent yet delayed decision of permanent-resettlement for the people of Attabad and its surrounding areas affected by the landslide/lake formation.