The role of agriculture in Hunza:

The Hunza valley lies in the western Himalayas. China lies to the north-east, Afghanistan to the north-west and Pakistan to the south. It is approximately 8,000 feet (2,440m) above sea level. The approximate population of the Hunza people is around 30,000. Hunza is basically divided in three parts Upper Hunza (Gojal), Central Hunza (Aliabad/Karimabad), and Lower Hunza (Shinaki). Hunza has linked with china and Afghanistan through Khunjarab Pass.

For centuries, Hunza Valley was almost cut off from the rest of the world and was almost inaccessible even in the presence of Silk Route. The main source of living was farming and hunting because from which daily living was maintained while hunting served as a source of income generation in the form of selling skin of hunted animals and with its exchange, commodities of daily use are obtained.

From ancient times agriculture remained the back bone of the Hunza’s Economy i.e. more than 70% of the living is dependant on agriculture either directly or indirectly. Agriculture in Hunza is organic i.e. in the Hunza valley, chemical fertilizers and spray are not used. The soil is enriched by the mineralized glacial water due to which healthy food is available in excess quantity to the people (it is also to mention that Hunza’s People are vegetarian). Also the land is distributed among the people in such a manner that each one has some of its portion which support his living along with his family.

There are three main product of the land:

On January 4th 2010, a massive land sliding occurred at Attabad Hunza, affecting almost 900 kanal area directly in which 25 families were living with cost of Rs.77 Kror ( as per Govt of Pakistan estimate) along with 19-deaths. From the disaster, Govt of GB/Pakistan declared the areas of Attabad and Sarat as red zone affecting 110-families of Attabad and 31-families of Sarat. The overall affected families from the crises are 457.

After 4 January, 2010 due to the land slide at Attabad 27 km long water lake was formed , which has totally isolated the Gojal region (Tehsil) district Hunza from the rest of the country because of the road at the disaster area were totally being destroyed. The bridge that connects Shishkat to Gulmit (Two main villages) was completely submerged in the water.

The accidental creation of Attabad Lake has created the environment of fear among the people of Gojal (Upper Hunza) and the regions downstream (Lower Hunza) as at first it has destroyed many houses, land, fields, bridges and forest of Ayeenabad and Shishkat and then has started to submerge the fields and houses in Gulmit.

This situation shaped up in to a disaster as it directly affects the livelihood of the people living in these areas disaster has directly affected the Karakorum Highway (KKH) and indirectly the Agriculture, Livestock, Forest. So the effect of this disaster are not just physical but also psychological as well.

Attabad disaster had a very negative impact on the agriculture of Hunza as it not only washed away a rich agrarian land but had also put a residential burden on the available land along with productivity. The negative impact of Attabad Disaster can be viewed as follows:

a)     From attabad destruction, the area of cultivation reduced.

b)     The excess quantity of agriculture output stopped.

As agriculture is the primary source of income for the people of Hunza. So through promoting agriculture, the lives of Hunza people can be rebuilt without affecting their culture and heritage. The promotion of agriculture in Hunza is very easy because its people need only proper direction as they possess key knowledge of agriculture and their land. So in this regards, some of the suggestions are as follows:

From ancient times women have been seen taking active part in agriculture along with men. The agriculture activities are mostly dependant on women because men have to do other tasks in order to fulfill day to day needs. But the part of women is gradually decreasing (it decreases from 70% to 50% in last four or five years) which affects the agricultural productivity. So therefore, the participation of women must be ensured. 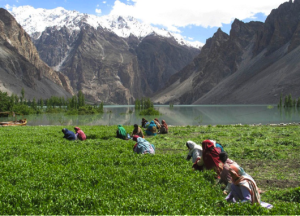 Professional women like teacher, nurse, handicraft women and shopkeeper etc have a very important role in promoting agriculture in Hunza. They can support farm activities before and after duty hours which can help them in removing financial constraints.

As the participation of students in agriculture of Hunza is much lower than required, they can be involved through partial participation after school/college/university hours (may be in vacations). Also girls’ students may help their parents in the fields adjacent to their homes. The provision of partial help by students will not only solve the problem of human resource deficiency in agriculture. 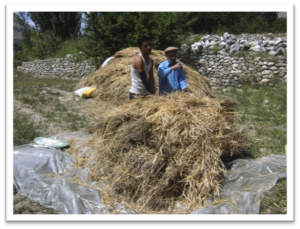 Training must be provided in the field of agriculture not only to farmers but to students as well. The educated community (students) must be trained on modern techniques so that productivity must be increased from the available land.

If training is to be provided to female graduates, then they can provide training to females in the whole area which will lead to high improvement in agricultural methods.

Productivity can be increased by using hybrid seed instead of local ones.

The farming in Hunza is slightly random. There is no proper pattern of crops and fruits with respect to area. In some area, soil may be perfect for potato while some places can produce more fruits than vegetables. So therefore, the farmers must be supported through the identification of right crop for right place so that the productivity may be increased along with the promotion of systematic farming. Also kitchen gardening and tunnel farming be introduced which will improve agricultural output.

Plantation is another area which can support Hunza valley financially by strengthening wood industry. Also plantation in hills will stop soil erosion and disaster like Attabad can be avoided.

a)     The research wing will work on the research of different kind of land, seeds, crops and methods of cultivation.

b)     On the bases of my research, they will suggest new techniques and method along with new seeds to the farmers.

c)     Research wing will also provide training to the farmers on the new methods of cultivation, tunnel farming and kitchen gardening etc.

d)     Under the Research wing, a research institute will be formed which will work on:

b)     The produced seed will be made available to the locals.

c)     Production wing will also be busy in the production of apricot oil, dried fruits and other seeds etc.

a)     The company will purchase agricultural surplus product from the farmers and will be stored in this wing.

b)     A portion of the purchased fruits will be made dry in stores.

c)     The storage wing will be used for overcoming the wastage of product.

a)     Marketing and Export wing will be engaged not only in exploring new markets but will also be in contact with local farmer for purchase of new product on compatible prices.

b)     This wing will also be working on the provision of transportation for exports etc.