This note looks at the territorial challenges that are posed by the Attabad Lake. The disruption in transportation links results in a lack of communication link. The Attabad Lake incident sets forth governance, control and territorial debate that require our attention. I will focus on the aspect of visual cultures and how that seeps into the practices of daily life and setting. This paper is in response to the Visiting School conducted in Hunza on the Attabad Lake event – “Conceiving Crises” in August 2014. 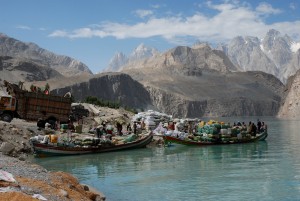 To understand an area or to get acquainted with a particular community in a geographic setting, it is perhaps helpful if one could share the same worldview.

The settlements in Hunza are comfortably nestled in the jagged cliffs, steep terrains, and rock faces of the Valley. Lush green lines drawn horizontally across mountains, almost like a border, indicate water channels feeding farmlands and built settlements. The upper side of the line is barren while the lower side of the line shows terraced farms, orchards and houses. Hunza Valley is fed by Ultar glacier and water channels were made centuries ago to bring the water down to desired areas for farming and drinking purposes. Access and used water flows further down and joins the Hunza river. Water is a natural resource that has been managed and governed by men in these valleys for a long time, practices and processes have developed and emerged over time to tackle water content, flow, temperature and accesses to be used for growing, drinking farming and producing energy. Attabad is located a few kilometers away from the main Hunza Valley, water channels and farmlands on the mountain have caused a part of the mountain to slide down into the Hunza river, ultimately blocking it in the year 2010. Attabad Lake is formed, a 35km long chunk of the Karakoram Highway, the only transportation link in the valley, that also connects China to the Warm Waters is submerged in water ultimately resulting in a separation between Hunza and Gojal. Relief activities and IDP are divided between Hunza and Gojal, Pakistani government extended support to the Hunza side while China offered relief goods for Gojal. The presence of the leviathan lying in the valley makes transportation and communication very difficult. Chinese government has supplied a huge amount of aid for the IDP in Gojal and are continuing to do so. 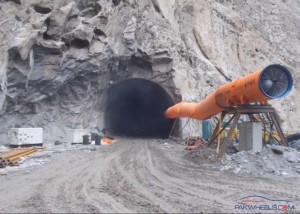 Efforts to restore the transportation link between the north and the warm waters has led to the creation of tunneled highway cutting across the mountains beside the Attabad Lake. Large warehouses and storage units have also been set-up along in the road in Gojal to keep the work pace efficient. Due to this, employment opportunities have risen for the people in Gojal who have felt neglect from their own government during the crises. Employment opportunity promises a better future for the affected. Since the lake poses a huge challenge for transportation and communication, food items and other packaged goods have being transported from China. Everyday household use items are laden with Chinese names and instructions for use hence teaching the local people the basics of Chinese language. Shops too have Chinese items symbols on their boards. The Chinese population in Gojal has also increased in the recent past for the highway tunnel project due to which the visual culture resembles that of a Chinese regional province.

Sost is the highest dry port in the world, which is located, a couple of kilometers from Gojal. Goods arriving from China are checked at Sost port and shifted into Pakistani local trucks that transport them down South in Pakistan. Due to the formation of Attabad lake, which hinders transportation of heavy vehicles, Chinese trucks and carriages move further down into Gojal to offload items in boats to be transported across the lake. Sost dry port now only acts as a checkpoint for items/goods. A few Pakistani trucks are still seen Gojal that were trapped there as the lake began to form after which an unsuccessful attempt to transport trucks over the lake resulted in a sanction for crossing heaving vehicles in boats over the Lake.

Chinese presence in Gojal has increased and strengthened in the past few years. Pro-Chinese sentiments are felt in Gojal valley for they have been saved, favoured and helped by the Chinese government in the times of crises and are being supported by the Chinese Government even now through employment opportunity and limited relief goods.The Chinese government did not stop at relief efforts but also introduced an apparatus for rehabilitation; employment through the new transport link construction project. Gojal’s local population does not direct the same sentiments towards Hunza/or Pakistani Government as they feel a strong neglect and lack of communication from the other side of the Attabad lake. The lake acts as a border that restricts access, communication and control of the province on the other side of the lake. With limited area and Pakistani population between the lake and the Khunjerab pass (Pak-China border), Gojal becomes a “ liminal zone”. 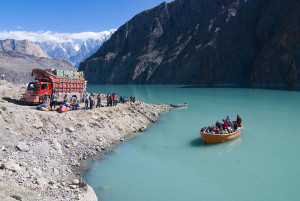 Although the Lake has become an obstruction or is more likely seen as one, it is required that the link with Gojal from this side of the Lake is established again. The lake should be used an opportunity, a junction, a point of intersection, rather than a border that cuts the places, people and cultures apart. Attabad Lake, the beautiful water body between mountains holds great potential for the affected people around it as a natural reservoir and a scenic place. Efforts should be directed towards bringing the people around the lake/affected by the lake together to gather around it, exchange a dialogue of potential progress about it rather than turn their backs and stay away from it. Attabad can be used as an opportunity for mutual interest between both sides rather than an obstruction.

– A porous space that has a re-organised structure and is rapidly losing its national identity. Acts like the humanitarian camp – that is looked after by an agency, which does not govern or rule them, but it manages them. This agency is successfully managing populations and land to its own interest i.e. trade.