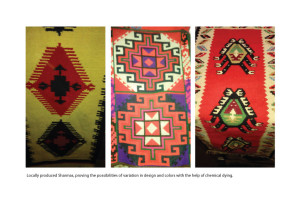 h was on the locally produced handmade carpets called Sharma. This is the traditional carpet of Hunza, manufactured and produced locally. From the yarn, which is made from the hair of the local mountain goats, to the local design and aesthetics of Hunza.

What led me into my research on Sharma was the fact that there was a cultural shift to be seen in Hunza, mainly due to the rise ofeducation and the awareness of its importance in people, leading to, along with other things, a decrease in the production andmanufacturing of Sharma in households.

As mentioned earlier, the Sharma is all handmade, of yarn, which is made of goat hair. (This yarn is mostly used in it’s natural colors but it could also be used in color with the help of chemical dying.)

People themselves made it, for themselves, in their houses. And around 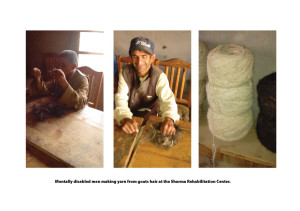 a decade ago, a local from Aliabad Hunza invented the spinning wheelwhich made the process of making the yarn from the goat hair easier.During the research I found out the introduction of Handmade Carpets in Hunza.These carpets are handmade but not Sharma.The handmade carpet is made from sheep wool which is not locallyproduced or  manufactured, in fact it is brought from Peshawar,Islamabad and other cities due to its unavailability in Hunza. 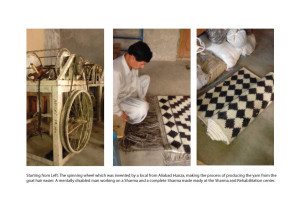 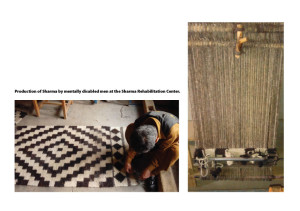 Not only that but the design and aesthetics or even the color schemes are all predetermined by the retailers or the carpet shopkeepers who are given the designs by  the prospect customers or people who take these carpets and sell them in cities. Hence, proving that the locals are now just being used as laborers, doing unskilled manual work and not using any of their local design sense and incorporating it in the production of the product.Ironically, in 1994 when the Handmade carpet production was introduced in Hunza by the AKCSP, simultaneously KADO started the Sharma Rehabilitation center. The Sharma Rehabilitation Center, as the name suggests, is a place for the mentally disabled men who come here to make the Sharma, using their own aesthetics and traditional designs, and is then marketed locally as well as to the tourist market.After conducting this research I came up with an implication of transition, which could be the new infusion of foreign design withlocal craft. My proposition is that, what if, the effort put in developing a new way of carpet making was put into the indigenous craft of making Sharmas?